The Star newspaper, on 30 October 2013, reported that 3 postgraduate students representing Universiti Sains Malaysia received Gold Awards at the British Invention Show. One of them was for the invention of a car security system which uses image processing micro-controllers, Google cloud and mobile technology to function. I feel proud because, firstly, I was from Universiti Sains Malaysia! Secondly, they were Malaysians awarded at the British Invention Show and not Malaysian Invention Show! Bravo! However, this is not the main point. I just got a bit excited with the news.

The news has drawn my attention to our vehicles’ security system. I remember vividly my first purchase of the Toyota Camry. I was contemplating if I really wanted that car, due to the hearsay of many theft cases involving this particular model. My friend had to pay a higher insurance premium for his new Toyota Estima, due to the high theft rate. Still, even though there were interesting, sporty models from Volkswagen and Mazda, I just liked the comfortable, simple, steady and hassle free Toyota Camry. During the first few months of owning my new car, putting on an additional lock for it was a habit. However, that habit eventually ceased over time. Is the car theft statistics really that alarming in Malaysia? What about in other countries?

The Star and Asia News Network reported on 30 January 2012 that there were 150 vehicles stolen per day in Malaysia. According to the Malaysian Federal CID Director, the ‘demand’ for stolen vehicles is at construction sites and remote areas, some for criminal activities and others for export. 4 wheel drives, such as the Toyota Hilux, is in great demand in the Middle East.

ACP Amar Singh Sidhu’s study, published in the Journal of the Kuala Lumpur Royal Police College, mentioned that car theft has risen from 22% (of total crime cases) in 1980 to 49% in 2004, and there is an estimation that total vehicle (not just car) theft will make up as 74% of total crime theft in 2009. These are the official reported cases. What about the unreported cases?

The following graph indicates the sharp rise of vehicle theft after year 2000; the rate of stolen cars was 1 car in every 24 minutes. The average between the period of 1980 to 2010 is lower compared to the number reported by The Star, as mentioned earlier. This means that car theft incidences have actually increased!

At the bottom of this article are statistics collected by the Royal Malaysian Police. It shows that Proton cars are the most popular targets for car thieves, followed by Perodua vehicles. Basically, it is based on the demand-supply principle.

Assuming that the other variables are constant, or what economists call ceteris paribus, the US has much higher car theft statistics, recorded by an insurance website, rmiia.org, with data supplied by the FBI. It states that “…one motor vehicle is stolen in the United States every 44 seconds.” There are 86 400 seconds in a day; that will work out to about 86 399.9 vehicles stolen in a day! What an alarming statistic. The consolation is that vehicle theft dropped 3.3% in 2011 as compared to the previous year in the US. 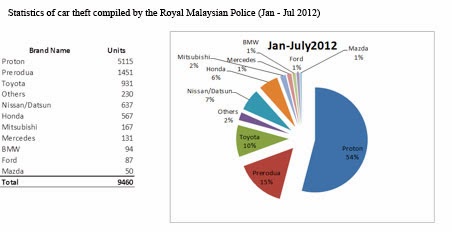 In Australia, the National Motor Vehicle Theft Reduction Council reported vehicle theft as 164 units per day in 2011 to 2012. Taking this statistic as an absolute figure, it is another consolation to know that Malaysia has the lower statistic. If you want to be happier, let’s forget about the fact that when there are more cars, the possibility of vehicle theft should increase. Australia has 695 cars per 1000 people while Malaysia has only 361 cars for every 1000 people. Keep the conclusion to yourself and be happy.

Let’s look at our neighbour, Singapore, a much talked about country in terms of safety and low crime rate. The Singapore Police Force reported an overall crime rate reduction from 1998 to 2007; the latest record could not be found on their website. According to philly.com, there were 3162 car thefts in Singapore in year 2003. Do you think this is serious for such a ‘tiny’ country? If we compare Singapore to Los Angeles, which has about the same population, during the same period of time, Los Angeles has 65 541 stolen cars!

Let’s twist the figures a bit to look at the statistics from another lens in comparing Malaysia and Singapore. It is difficult to find the latest statistics for Singapore; therefore I will use the 2003 figures. Singapore had 3162 cases of car theft in 2003 with its then population of 4 253 000. Malaysia’s population in 2003 was 25 060 184. I do not have the car theft statistic for Malaysia in the particular year of 2003, but we know that the car theft rate has increased from the research done earlier. Let’s take the route that is slightly unfair for Malaysia by taking the figure reported by the Royal Malaysian Police from January to July 2012, which is 5836 cases in 7 months. Singapore had 3162 cases in 12 months; therefore, based on the average per month, 7 months would have 1844.5 cases.

You may say that it is not appropriate to measure theft cases against population. Then let’s twist that around again to measure it against the number of cars available. The World Bank recorded that Singapore had 148 cars for every 1000 people while Malaysia had 350 cars for every 1000 people, between the period of 2003 and 2007. Based on the above populations for Singapore and Malaysia, with the reference from the World Bank, Singapore had 629 444 cars and Malaysia had 8 771 064 during those days. With this given statistics, my calculation indicate that 1 vehicle theft case happened for every 341.25 cars in Singapore; as for Malaysia, 1 vehicle theft case happened for every 1503 cars. This statistics actually tell us that Singaporeans need to be more concerned about their cars’ security than Malaysians! Without prejudice (for I love people from every nation), I present these facts reflected from the figures, again based on ceteris paribus.

The next important topic is, since car theft is a fact, let’s have a very good and secure system to safeguard our property. I have come across many types of car locks, from locking the wheel or the steering wheel to disabling the vehicle and recovering it via the GPS system. With all these, is it enough? The thieves are clever today – they are tech proficient, probably educated and Internet savvy. They could learn to disable your system with just a few clicks, cuts, touches or bangs. This resource gives us the top 10 systems that are most effective. Personally, after much research and sweat, I found the best way, much better than all the above mentioned. Pay attention to the following, very complicated and in-depth explanation on the best car security system. After researching and researching, I finally learned it from Dr Christopher Teh Boon Sung, a PhD holder, no less. The best method is “Don’t show, don’t tell. The less people know about your security, the better.” Don’t you think that that’s a brilliant method? So, let’s sshhh…