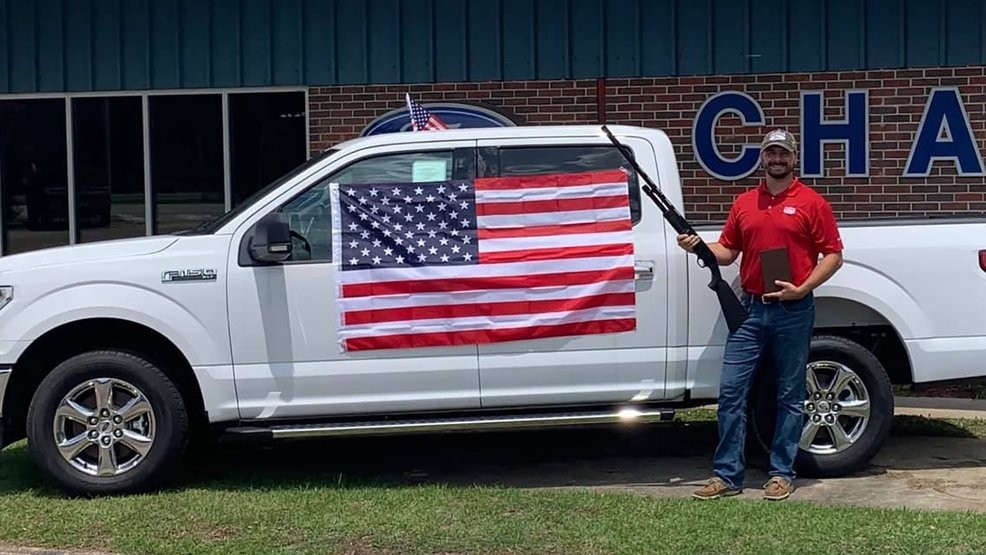 My Donald Trump-loyalist daughter, residing in the gun-ridden Texas “republic”, had an idea for our friends who are auto dealers in the Philippines and are struggling to increase sales. She recommended that they follow in the footsteps of an Alabama auto dealer, who has gone viral for offering a Bible, a Shotgun and an American Flag with every car purchase.

I thought at first that this was a promotional program by a gun-carrying evangelical fundamentalist with an amplified sense of nationalism. But the 4th of July promotional campaign by Chatom Ford, an auto dealership in Chatom, Alabama, is real. The campaign that touts  “God, Guns and Freedom” has gone viral and certainly increased their cars sales phenomenally.

Big news organizations like CNN, Fox News, Newsweek, USA Today and others rushed to the dealership to see the campaign first-hand. The dealer’s general manager, Koby Palmer, is so proud of his sales team’s innovative idea. He said that the message they are sending is: “We in Alabama are God-fearing citizens with a deep-rooted sense of nationalism living in a very safe community where people really love to hunt.”

Life & Death on the World’s Roads: Why are Philippine Roads some of the Safest Around?

Unlikely to be run over by a car there.

This campaign invited both a bandwagon of admirers and a caravan of critics. Palmer defended the program and said they are not being irresponsible. The 12-gauge shotguns are only given if the buyers are legally certified gun owners and for those who are not, they have to be referred to a certified gun dealer who can conduct a background check before giving the gun to the buyer. Buyers are not forced to accept the bible and the flag, but almost all buyers do.

Palmer said, “We are really being patriotic, not political…anyone who doesn’t 100% agree with what we’re portraying, we are not trying to force our beliefs on anybody. We respect anybody who disagrees, no matter how vehemently they do.”

News of this campaign created a good number of admirers in the Philippines and loyalists of President Duterte claims their “idol” would like this idea if he owned an auto dealership. Maybe the flag and the guns he would like, but I am not sure about the bible.

On the other hand, critics question: “God and Guns? God and Freedom? And, Guns and Freedom?” These do not go hand in hand and do not favourably co-exist.

Rightly or wrongly, I think this promo will work well for Filipino auto dealerships. Do you think this is a good idea?

Honda E: The Little Electric Car that Could