A motorcycle that runs on water? 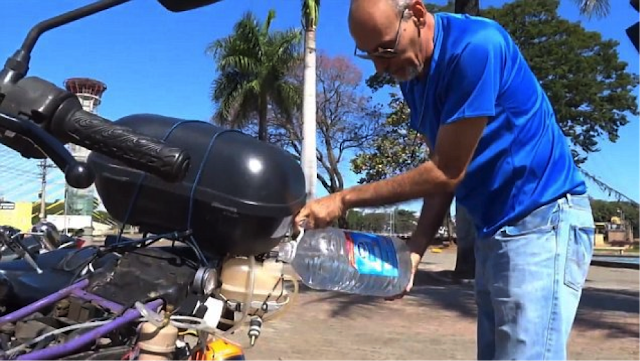 Don’t get too excited. Here’s why…

The T Power H20 has the internet all excited. Revealed by the creator, Ricardo Azevedo, in Brazil last month, he claims that the motorcycle runs on water, as the name suggests, and can travel 500 kilometres on just one litre of glorious H20.

But, before we started eschewing petrol-powered vehicles, there is a general skepticism about water-powered machines – if they were viable, there would be more of them around by now. The general consensus is that the first law of thermodynamics would not allow it: the total energy in an isolated system is constant – it cannot be created nor destroyed, only transformed…let’s not get into more details than that. It is possible to make it look like the car runs on water, without breaking this law. Usually it is done with metal hydrides which react with the water to produce hydrogen, which in turn is used to power the car. But these hydrides will deplete and needs to be replaced, so essentially it is the hydrides that are the fuel, not the water, and it takes a lot of energy to create these hydrides.

That hasn’t stopped the T Power H20 from making rounds on the internet and news portals, and garnering a lot of interest. The designer claims that a single car battery generates the electricity to severe the hydrogen bond in the water molecule. Again, when the energy stored in the car battery runs out, it will need to be recharged or replaced.

This isn’t the first time that someone tried to sell the idea of using water as fuel. A Japanese company, Genepax, claimed it had created a water-powered car back in 2008, but was attacked with harsh criticism and has gone quiet ever since. There was also online buzz about salt water-powered vehicles and the news about the US Navy successfully converting sea water into fuel. Then there was Stanley Allen Meyer who ‘invented’ a water-powered car many years ago, but his claims was found fraudulent by an Ohio court; his fame perpetuates because his death sparked off conspiracy theories of assassination. The patent for his invention has since expired, but no manufacturer has made use of his technology, which says a lot.

Lotus and Proton turn to China for future survival

More in featured
Boo! Five Car Ads That Are The Worst, Sexist and Epic Fails
October 27, 2019